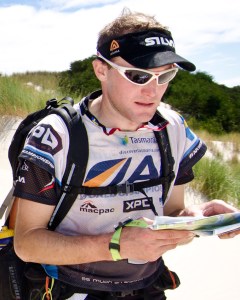 Grew up in Christchurch, New Zealand but now lives in Göteborg, Sweden with his wife Sara and kids Karin, Greta and Tor. Aaron joined team Silva in 2008. Aaron parents were some of the original multisporters, so he grew up with the sport and doesn’t know any better than to go out and race hard. Has been on the podium (often highest up) in most major international multisport competitions. Aaron’s role in the team is as navigator, he carries the map and compass while the others carry the heavy stuff! Aaron works as a Civil Engineer at Sweco in Göteborg.

In Christchurch, which is the finish town for the Coast to Coast (Multisport World Championship for individual competitors) and a hub for multisport athletes.

I’ve got quite a few- firstly theres the guys I race with now:

Björn – fell off a cliff racing in Abu Dhabi and was lucky to survive. Now he’s back racing and apart from a few scars he’s stronger than ever.

Jossan – Jossan just keeps getting stronger and stronger, she is key to the team’s success.

Mattias – has unsurpassed organisational skills which have played a major part in us having largely trouble free races. He’s calculates in excel beforehand exactly how much darkness and energy we will use in the next week of race so we neither carry too little or too much.

Robert – the trouble with Robert is that he’s too big and strong. If you’re not sitting in the same double kayak as him be makes you suffer, even if his kayak partner has stopped paddling.

Aside from that I’ll have to say my family, between mum and dad they won all the major adventure races, they’ve both won the Coast to Coast and dad was second in the 100km World Championship in 6h 37min (that’s 3min 56sec per km!!!). Both are still active, mum still does adventure racing and dad still runs. Then there’s my 2 sisters who can both run pretty fast, Lara won the Australian cross country championships and stuff like that…

The southern Traverse in 1996 in mum’s team. One of her teammates got pretty bad frostbite snowshoeing in Alaska and they needed a last minute replacement…

Well it’s actually a quite well known fact- I complained about having a sort butt and so Kathy Lynch told me I didn’t have a cyclists asshole. Now I try not to complain too much.

Hopefully I can start taking the kids to training before that.

Civil and Environmental Engineer at Sweco in Göteborg.

Getting cold in on a ridgeline in the Takatimu Ranges in the Southern Traverse in 1998. After that I decided not to be a mountain climber.

Coast to Coast 2006, I can’t really remember the last hour then passed out on the finish line. After a night in hospital they decided that I hadn’t had a heart attack and let me out just in time for the prizegiving.

I still remember when I was seven crewing for dad in the Cost to Coast when he won, that was pretty motivational.

The best scenery was probably the world championships in Norway / Sweden in 2006. My favourite race must be TWALK.