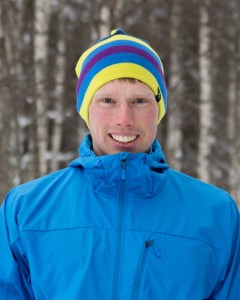 Mattias has dabbled in multisport since 2001 and joined the team in 2009. His first multi-day non-stop race was the AR World series race Explore Sweden in 2009 (which the team won!). Mattias grew up in Örnsköldsvik, Sweden, with the forest and hills out the back door. He moved to Umeå in 2003 for studies and where he is currently working on a PhD in remote sensing at the Agricultural University and where he lives with Helena who is a member of the Swedish Speed Skating Team. Like several other members of Team Silva Mattias was born with a compass in his hand and cross country skis on his feet. Mattias is a pretty slick navigator and has unsurpassed organisational skills, something which has been key to the teams recent success.

In Örnsköldsvik, the high coast area. A lot of hills and beautiful coast perfect for adventures!

No one special for the moment, but when I was younger I looked up to Gunde Svan (the Swedish x-country skier). During the recent world championship in Australia I also had a bad stomach but was able to finish in a top placing, just like Gunde.

I need to cut a hole in almost every pair of shoes I buy and give them to the shoemaker patch them. The reason is a bump I got because I used to narrow biking shoes in a 28 hour race in the beginning of my adventure racing career… and my feet are I size larger in length as well since I started adventure racing.

I will probably spend more time with my family and work on my photography hobby – it’s hard to stop and take a good picture when the rest on the team is always in such a hurry and won’t wait up!

Researcher in remote sensing at the Swedish University of Agricultural Sciences in Umeå.

I had stomach problems in the World Champs in Tasmania 2011. Everything I ate and drank came out for three days of racing! I felt so weak and wanted to carry and help the team, but I barely carry my own weight. But thanks to strong team mates we finished second in the race!

The Swedish Champs last year where we were narrowly beaten by Thule – but it won’t happen again!

When Robert comes in to one of the transitions in the Explore Sweden race 2009 and just hold up his arms and waits for the support crew to take of his PFD (and they did!). The support in that race was amazing, we felt really strong both on the course and in the transitions!

The APEX race in Switzerland 2011. The scenery was amazing as well as all officials!