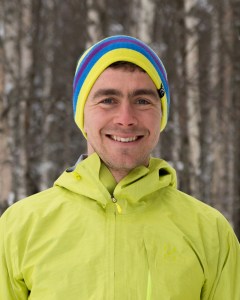 Björn was born in Knaften (Lycksele),  but now lives in Kont, by Umeå Rivermouth in the Baltic Sea. He lives with teammate Josefina and their dog Lo. Björn is the captain of Team Silva and has been on the team since 2003. He has a background in orienteering and ski-orienteering and loves long cross country ski races such as Vasaloppet, even though he only knows how to double pole… As soon as the chance arises Björn disappears into the mountains, with touring skis or with a fly fishing rod. Björn has a weakness for full bodied red wine, single malt whiskey and woodchopping, although luckily he usually doesn’t dabble in all three activities at the same time.

Born in Knaften, Lycksele, but moved to the flatlands near Umeå when I was 10. I still live in the flatlands although I always long to be in the mountains…

Don’t have any real idols, but I’m inspired by those that do their own thing really well. I’d love to have my training mate Martin Rosvalls thought and training focus, then I’d get even more done!

I was a last minute replacement for Team Silva (not the same Team Silva that I race in today) for the Arctic Circle Traverse in 2002. After racing over 800km from Riksgränsen to Boden and with several black toes and experiences I was hooked. We won but that was thanks to my experienced teammates Anders Widegren and Peter Juthberg. I started out but only packing energy bars, all the same flavor, on the first 120km running leg and ate other food the rest of that season… these days I try to have a more varied diet when racing.

Played the violin for ten years and sang in a boys’ choir.

I work as an environmental consultant and do contract work for the outdoor industry.

Put my foot I the wrong place on a ridgetop in Abu Dhabi in 2007 and fell over the edge. Got away with a broken femur, a crooked back and a smashed shoulder.

Rode hard at high altitude in the Raid Series in Les Arcs (Francee) 2006. Two stages later I went from feeling like superman to crawling on all fours- sorry again Martina, Micke and Johan!

I’ve got lots of good memories, but I often think of Multi Mike’s (Mikael Lindnord of Team Axa Adidas) Explore Sweden races (how can somebody so uninterested nature set such beautiful courses?). BAMM in Björkliden is also a favorite.